Plants of the Coastal Forest Garden 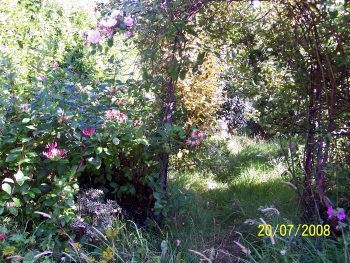 Indigenous plants are used alongside introductions to constantly explore the carrying capacity of the garden.

Various microclimates are made use of including the protection afforded by two greenhouses on the site.

Crop successions are an important and satisfying part of the annual round as they appear each season with no or very little preparation.

Invaluable Sources of Information- Agroforestry Research Trust Catalogue and publications ;  Plants for a Future - Ken Fern, book and website; The Herbal Books of Juliette de Bairacli Levy; The Forest Garden Robert A de J Hart; How to Make a Forest Garden Patrick Whitefield; Food For Free Richard Mabey; Salads The Year Round Joy Larcomb; A Discourse on Sallets John Evelyn 1699 and many other articles and publications seen across the years.

The plot was first planted in 1982 and has been added to across the years. A number of plants have failed or are struggling against the harshness of the environment; buffeted by salt laden winds from all four quarters, seduced into early growth by the mild winters and recently hit by a late frost, said to have been the worst for 54yrs in Cornwall, the high alkalinity of the soil which is mainly wind blown sand and the predation of rabbits and slugs and snails. Despite all this the last twenty five years have seen some progress that I hope to show on the following pages.